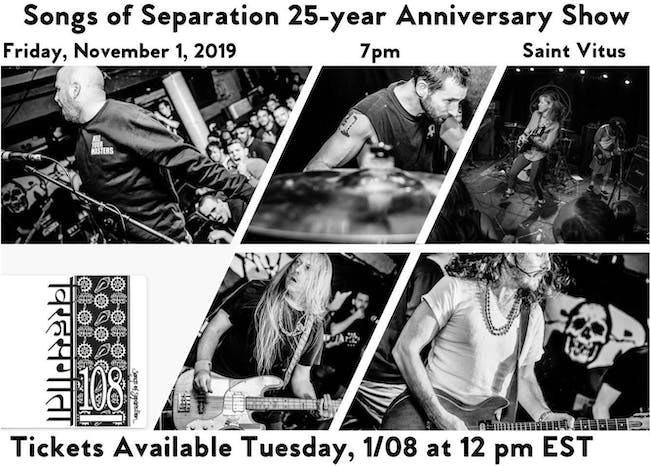 Missed out on tickets? Try using our Ticket Exchange powered by Lyte to find tickets to this sold out show.

The message conveyed on the first flier announcing the formation of 108 perfectly encapsulates the purpose of the band: "Direct expression. Bypass mind. Bypass intellect. Self to sound. Against the dead trend. The robot me. The modern social entity stripped of color and vibrancy. Not philosophy. Not religion. True self expressed in sound."

Simply put, 108 has meant a lot of things to a lot of people over the past 14 years, but the initial announcement of the band's arrival on the punk scene in the fall of 1992 remains the most apt description of its guiding spirit. In the 4 years following its formation, 108 constantly toured the US and Europe, releasing 3 extremely popular studio LP's, an EP, a live LP, and various songs on different compilations. When the guitar player decided to intensify his studies in Hinduism in 1996, 108 disbanded.

Fast forward to the summer of 2005 when 108 was asked to play a set at festival. In preparation for this event, the group holed up in a practice studio during the week of the show and found that there was still a natural spark between them and that their old songs had taken on a new life. Two days prior to the show, the festival was cancelled. Within 24 hours, however, 2 shows were put together in Philadelphia. It was at these shows that the excitement of the crowds fueled the energy the band felt in reuniting and prompted the arrangement of a 7-show tour, on the East and West Coasts, in the spring of 2006. The passion and energy they felt earlier was further nurtured when playing these next 7 shows, which confirmed 108's desire to continue playing and composing again. Over the summer, the band saw the release of Creation. Sustenance. Destruction., a 36-song discography on Equal Vision Records documenting their original output of music, followed by 4 more shows across the US and a quick 10 day, 10-show tour of Europe covering 6 countries. During this period, they began writing new music, and it became clear that the best was yet to come.

The heaviness and intensity of 108's music, fused with the band's spiritual, political, ethical, emotional, and intellectual underpinnings, is an unlikely marriage but one that produces a powerful synthesis in the world of heavy music. The songs on this demo typify this synthesis, with lyrics that speak to our soul-destroying world:

"Lose our minds, one day at a time when pain is all we see. Void humanity with stories at 11, monetary interests (define the) bottom line. Lose our soul, one verse at a time when words overcome feeling. Not a lack of this nor a lack of that, it's just our kind. Is this what I wanted to be? I'm dying for something I never wanted to be." (from "Our Kind")

No one can deny that fake fashion posturing and lifeless clone music are on the verge of killing heavy music. Revolted by these trends, those who followed 108, even those who thought they had outgrown the genre, are responding to the band's psychedelic noise infusion, brutal riffage, and incisive lyrics with enthusiasm and profound relief. Those who never experienced the band before have been given access to a band that changes their perception of what a punk band can be. On an undeniable rampage, 108 is shocking listeners back to consciousness and getting them thinking again, feeling again, and banging their heads in defiance at the near-death of heavy music with a message.

All of us at Deathwish are truly proud to be working with such a landmark creative entity in 108. When they formed, their music and ethos opened up a world of soul and heart within the hardcore/punk community that changed this scene forever. Their ripple effect of influence continues on to this day. We are honored to be part of their legacy.

Their first proper studio album in over a decade, "A New Beat From A Dead Heart" was recorded and engineered by Kurt Ballou (Converge) at Godcity Studios. With the opening bass line of "Declarations On A Grave", 108 transports listeners to a new aural plane with it's jarring grit and intensity. Standout track "Three Hundred Liars" is as musically infectious as they come, pulsing and writhing through it's many sonic twists and turns. And elsewhere on the album "Angel Strike Man" soars with a Bad Brains-esque white hot anger while "The Sad Truth" cuts deep with repetition and poignant poetic vocal styling. These, along with the other songs on the album, are all sonically unique and spiritually invigorating. Redefining "heavy" with their controlled chaos, drive to enlighten, and will to inspire through sound. All of these qualities make "A New Beat From A Dead Heart" the kind of rare artistic achievement that few bands could ever attain.

"The controller of all

Lies at the heart of the machine

And connects it's wires

To the living being who is under it's spell."

Recorded over a frigid weekend in Boston, MA in the analog domain of Alex Garcia Rivera (ex-Give Up The Ghost) and later mixed by Kurt Ballou (Converge), 108 have returned with their most electrifying and intense album to date, "18.61". From the first tension filled notes struck in "God Talk", it's apparent that a spiritual restlessness and awareness continues to writhe in the collective consciousness of 108 which is an attribute that has set them apart from the rest of the musical world since their inception. From there "18.61" pounds forth with the upmost intensity. Standout track "Crescent Moon" races at manic speed before crashing in on itself in one of 108's heaviest moments ever. Title track "18.61", a moving and brooding song that is as unforgettable as they come, combines all of the unique musical qualities that make up 108. The gritty "Reduced" showcases new drummer Mike Justian (Trap Them, Unearth, etc.) as the new heart at the center of the 108 machine, rhythmically pushing the envelope with his punishing percussive power. Though the aforementioned songs are electric in every way, it's in some of the more daring tracks that "18.61" truly starts to really shine. "Mannequins" and "Forever Is Destroyed", for example, pick up where classics Black Flag and Rollins Band left off, taking frantic and unpredictable sonic turns that only a band like 108 could navigate. All of this makes "18.61" yet another stunning album from a band that continues to write their own destiny as one the most important and influential hardcore/punk bands in existence today.

108 members are currently scattered on a variety of continents. What will the future hold for this legendary band? Only time will tell.